HOW TO READ HARD BOOKS Like many people there're all sorts of "important" books I've never slogged through. This is because, like important people, and interesting new food concepts, these works are intimidating and unintelligible and not relaxing. However I have found ways over the years, to find my way into such works.

I forced my way into Don Juan when I was an undergraduate transfer student at NYU. I had to make up some classes since I'd missed some things when I was in a punk band. So I was stuck in New York City, taking summer school classes, without really knowing anyone and with not that much to do so I would ride the F train to Coney Island every day and sit on the beach and read Don Juan, which, of course, once I got going on it, was a totally awesome, addictive, sexy and hilarious read. Also, much of it is set on beaches where the main character is seducing exotic beauties from far away lands. The combination of being on the beach and having no other choices with me, forced me into it. I can't recommend this book enough. It was beach riding in it's highest form.

2. The Bible by Various Artists

I was in Israel once, just wandering around, and a guy in a youth hostel gave me a bible he had, which cross referenced everything in the index by location. So then, whenever I went anywhere I looked up all the stories that location was featured in and read all the stories about it. This made it all really fun and interesting, and as I had never really been able to crack the bible, suddenly it was relevent and fun and you really wanted to know what happened in a place where you were actually standing. Over the course of the month I was there, I read a big chunk of it.

I am about to go to Ireland. I could barely get through Portrait of an Artist as a Young Man. I could barely get through Dubliners. Now I am going to be stuck with Ulysses and NO OTHER BOOKS for eleven days. Because I have failed to read Ulysses so many times, I am going to START in the MIDDLE, and just read the good bits. And then if it catches hold, which I'm hoping it will, I will somehow become smitten and work my way through.
Posted by Blake Nelson at 9:07 AM No comments:

MY YEAR AT SEA 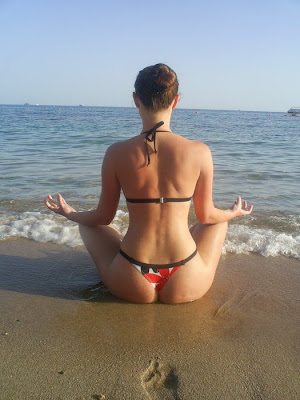 When I first got my office down here at Venice Beach, I kept thinking I should write a little memoir thing called, "My Year At Sea" about living on the beach. Everyone wants to live at the beach at some point in their life. Maybe it'd be interesting. I guess it has been, but not so much as I thought. Every once in a while I come up with some little insight like: "People scream a lot at the beach." This I guess is due to the cold water splashing on them periodically. Or the fact that they are already half naked and their friends are trying to pull down their pants. Or they are just very happy and they are girls and girls do like to scream I've noticed. Why is that?

Another observation about the beach, it calms you down. I don't know why more people don't take advantage of the soothing quality of large bodies of water. Why would you take some pill that costs twenty bucks when you can just go walk by the ocean? In NY I used to walk along the Hudson when I was stressing. Always fixed me right up.

So, if those are the only two insights I have I guess I don't need to write an article or a book or whatever. One blog post will do. My Year At Sea.
Posted by Blake Nelson at 1:14 PM No comments: 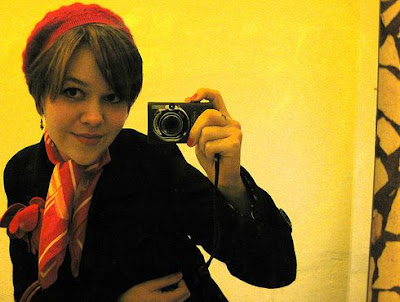 A friend of mine is reading GIRL, my first novel, and we were talking about it and I ended up reading a big chunk of it the other day.

I hadn't read more than a page or two of it in years, so this immersion was kind of revelation. Mainly I was shocked by the sex and drugs and carnage and brutality of Andrea's high school, the so innocent sounding "Hillside High." There's race riots, rape, murder, suicide, people stopping being friends with people without communicating about it or providing closure. And of course everyone's having sex with everyone all the time. And not in committed relationships!

And in the middle of it is Andrea Marr, who in my fond memories is this charming, lovable, observer just doing the best she can. But NO! Andrea is as bad as the rest of them!

I sort of understand a little better, the shift in Amazon commentary from the 90s when teens were so consistently positive about GIRL, and the newer comments in which today's teens struggle with all the mayhem and loose morals. They just don't know what to think about it, you can tell. Which is fine. I understand. Times have changed. I also don't feel so bad that I've kind of cleaned up my later books. I did the right thing. The whole world has "cleaned up" in a way. And when I think about it, and am honest, I think I'd rather be a kid now, in the Glee era, the time of the High School Musical. It just seems so much easier now.
Posted by Blake Nelson at 3:48 PM 6 comments: 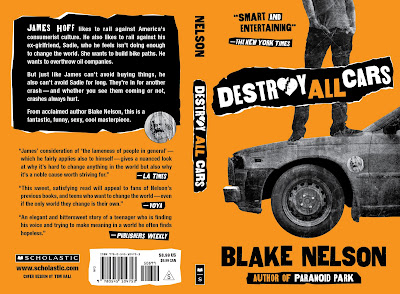 So psyched about this awesome new cover for DESTROY ALL CARS. And so funny that I'm the one who gets the "punk rock" treatment on a book, since I have now lived through every version and mutation and re-treading and reworking of "punk" since it's beginning. Oh my god, who will forget the taking over of 77 Poseur Punk by those horrible barbarians the '80 Hardcore Punk revolution. It was practically war!! Well, that was just the beginning it turns out ...

And you gotta love the floating Karl Marx head. That has become a favorite section of the book, (the short essay on Karl Marx's "influence" on main character James Hoff, which is mainly that James thinks "huge beards are rad".) I was so worried no teenagers would know who Karl Marx was. Which in fact is generally the case, but the floating Marx will help the kids. "He's sort of like the Santa Claus of Political Revolutionaries" his head seems to say.

Awesome cover. And big thanks to my bud David Levithan who somehow got it for me ...
Posted by Blake Nelson at 6:04 PM No comments: