Due to its subject matter, which deals very plainly with drug/alcohol abuse and the struggles one faces throughout the initial stages of recovery, Recovery Road is already set apart from other television shows aimed at teens. It’s certainly not the first teen show to deal with alcohol and drug abuse – “Very Special Episodes” have covered this ground since the ’90s. Nor is it the first to see its leading lady through this fight – The O.C’s Marissa Cooper was social chair by day, and passed out by night.
However, while other shows have confronted addiction in a fairly one-dimensional manner, treating an overdose as a speed-bump or portraying all addicts as strung-out skeletons with bad teeth, Recovery Road aims to paint a complex picture of what it’s like to struggle with this disease, and to provide a more realistic idea of what an addict can look like.
Maddie isn’t shooting heroin or suffering from massive withdrawal, but she has licked cocaine off of a bathroom floor before, and that’s the kind of behavior that crosses the line between fun and full-on dangerous. On Recovery Road, addicts come in all shapes and sizes, and so do their paths to sobriety, helping to demonstrate to young viewers that addiction is deeply complicated, rather than reserved merely for those who are “Bad” or weak.
That being said, the show definitely has a tendency toward preachy and overdramatic qualities. One of the pilot’s weakest moments comes toward the end of the episode, when a patient who has just completed his time at Springtime relapses and returns to wreak havoc on the house. Vases are broken, the lighting is dimmed, and the music stings, as Maddie is given a look at what her life could be like if she doesn’t get clean. It’s a big moment with an After-School Special quality that looks down to its teen audience and undermines the more subtle portrayals of addiction and relapse featured on the show.
......
If the first few episodes are any indication, Recovery Road is a solid drama grounded firmly in the teen genre, borrowing just enough from its predecessors to achieve a comfortable familiarity. Its identity pertaining to said genre seems to be Recovery Road’s downfall at points – the episodes can feel sentimental and neutered, despite attempts to portray addiction in a multifaceted manner. However, with its quick dialogue and fully realized main character, Recovery Road just might flourish into a series that transcends its early trappings.
Posted by Blake Nelson at 3:58 AM 2 comments: 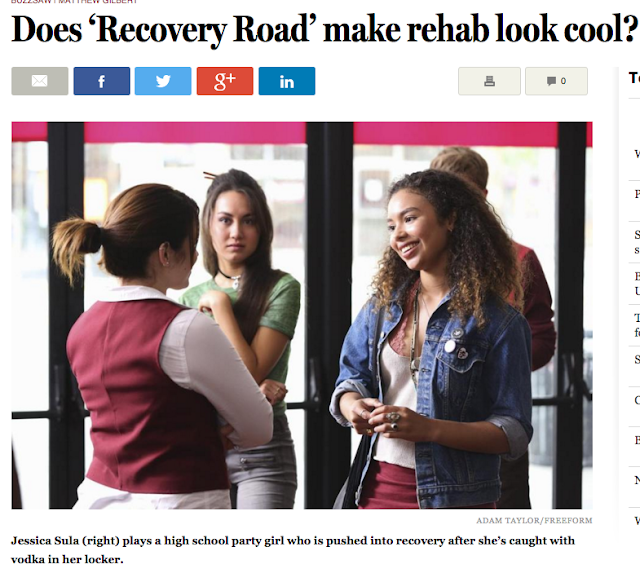 By Matthew Gilbert GLOBE STAFF  JANUARY 23, 2016
Last month, I reviewed an HBO documentary called “Heroin: Cape Cod, USA.” It was among the most powerful, achingly sad films I’ve seen about the heroin epidemic, as it brought us into an intimate relationship with eight young Cape addicts struggling to break free.
The addicts, in their teens and 20s, opened up to the filmmaker, Steven Okazaki, and we saw up-close how their acute self-awareness about the dangers of using — the legal and physical hazards, the all-encompassing bleakness — kept losing out to their more acute bodily cravings. Surrounded by healing salt air and finely weathered shingles, ensconced in tight rural and suburban communities, they nonetheless continued to poke needles into their bruised arms, hands, and necks.
Some of the addicts in “Heroin: Cape Cod, USA” overdosed and died during the course of the filming. There is nothing artificially hopeful or romanticized in the film, only the heartbreaking sight of a desperate parents’ group at their wit’s end and beyond. Okazaki offers nothing to soften the blows, no easy formula to cure the disease. It’s a hard portrait of a hard reality.
So when I sat down to watch “Recovery Road,” a new scripted series about young people and addiction — not only to opioids, but to other drugs and alcohol — I had a lot of trouble making judgments.
“Recovery Road,” which premieres Monday night at 9, is on Freeform, which until recently was called ABC Family. Based on Blake Nelson’s 2011 young adult novel, the drama is about a high school party girl named Maddie (Jessica Sula) who is pushed into recovery after she’s caught with vodka in her locker. During the day, she attends regular classes, but at night and on weekends she lives in a nearby sober facility for young men and women.
The milieus in the Freeform series and the HBO movie are similar — they’re set in a suburban, middle-class, and largely white population (although Maddie is mixed race), not in the urban and primarily black worlds that TV writers lean on so heavily when telling drug stories. But “Recovery Road” is far from relentlessly hopeless. At first, Maddie hates the sober house, is irritated by its inhabitants, and resents having limited phone access and a curfew, of course. Relapse is in the air. But then she starts crushing on a cute guy who lives there, Sebastian De Souza’s broody Wes, even though she knows it’s a bad idea to focus on anything but sobriety for the first year. She begins to feel at home.
The sober house is a warm and cozy place, even a little bit like “Friends” at certain moments, despite the struggles going on within it. Craig (David Witts) is the father figure, a twentysomething therapist at the facility who’s remarkably stable and wears smart-guy glasses, and Cynthia (Alexis Carra) is the mother figure who goes to the house when she’s not counseling at the high school. Vern (Daniel Franzese from “Looking”) is the lovable bear, Trish (Kyla Pratt) is the kooky and hyper former meth addict, and Rebecca (Lindsay Pearce) is Maddie’s frenemy.
If it sounds like I’m slagging “Recovery Road,” I’m not. I’m just wondering if there’s a place for a show that soft-sells the rigors of addiction and sobriety, that makes the idea of recovery look almost desirable. Freeform is a network whose target audience is young — what the network has called “Becomers,” viewers between 14 and 34. Is it valuable for these younger people to see the recovery process as something that isn’t a circle of hell? Will the gentle and kindhearted ensemble vibe of “Recovery Road” make it easier for a young addict in the viewing audience to contemplate getting sober?
Or will it make the idea of addiction seem less dire — as if getting hooked is no biggie because recovery is as easy as a very special episode of “New Girl”?
And how much responsibility do TV producers of scripted series have when it comes to hewing close to the darker sides of the truth? As a soap opera, a genre that generally traffics in clichés and hyperactive plotting, “Recovery Road” isn’t too bad, if you don’t mind a few teen-drama banalities. I’ve seen worse. Also, the show is earnest and well intentioned, as it shows us a young woman grappling with denial and working to get her life on track. It’s not a cynical venture. But it does make happily-ever-after into a distinct possibility.
Matthew Gilbert can be reached at gilbert@globe.com. Follow him on Twitter @MatthewGilbert.
Posted by Blake Nelson at 1:05 AM 1 comment: