Christina Kelly and I talking about SASSY and GIRL 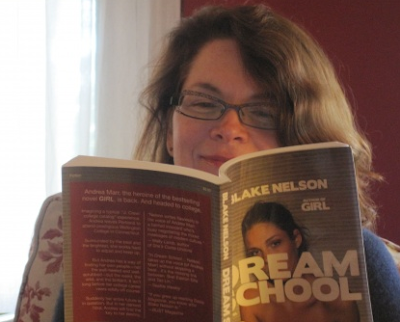 CHRISTINA: I first met Blake Nelson in the early 90s, when I was back at Sassy, and we published excerpts from his awesome first novel, "Girl." That book is now beloved by an entire generation. It tells the story of a suburban girl named Andrea Marr who discovers punk rock and alternative culture.

Blake had an amazing ability to write in the voice of a teenage girl, even though he was a 20-something hipster guy. He has gone on to write a total of 12 books, which is both impressive and gives me book envy. Finally, in December, "Dream School," the sequel to Girl is coming out. It’s about what happens when Andrea goes off to college.

You guys, it’s really good! I recently asked Blake many annoying questions about his books and writing, which he graciously answered ....

Christina: I've been thinking about how we first found "Girl." An intern, Christine Muhlke, who used to screen all the fiction that came in, put it on my desk with a note that said "Evil Genius." I read it and loved it. That much I remember. What I'm more hazy on: Did we run your stories as they were, or did we edit them? Do you remember? Was I a bitch? I hear that I was a bitch back then.

Blake: You were not a bitch, you were a taskmaster, and you had to be, because you were suddenly at the center of the hipster universe. Everyone wanted a piece of Sassy, which you seemed to find amusing but also very stressful. Your overall response to the pressure seemed to be: EVERYTHING HAS TO BE GOOD. And of course everything isn't always good, so I'm sure you had to disappoint a lot of people, hence you are a bitch....

But backing up to how we met: I was of course a huge fan of Sassy. So I wrote a short story called "Cybil Shaves Her Head" and sent it to you. You rejected it, but you called me in Portland and told me that in short stories for magazines: "The character has to change."

So then, since you'd actually called me, (CHRISTINA KELLY CALLED ME!), I thought I might have a shot with an excerpt, and when I finished the book, I went through it and found sections I thought could stand alone as stories, and had "people changing" and I sent them in.

Your editing was very light. I understood the parameters. It was really effortless, which made it hard to drum up excuses to come to your offices, but I still managed go there a lot. I had huge crushes on all of you guys. And I loved your grimy offices. Every time I walked out of there, I was like floating on a cloud.

And then the best part of the story: When the excerpts ran, you got a bunch of letters from readers and you gave them to me -- it was a pretty good stack -- and I was down to one book editor who was still considering the book, so I took the letters to her and that convinced her to offer me a contract.

I still tell young writer types: "Christina Kelly once told me: The character must change."

Christina: Yes, I think it is coming back to me. I remember you visiting the offices, and I remember once going to a Roger Manning show with you and some of the other staff. I didn’t know about the crushes though. So, why did you choose to write in a girl's voice? How did you know what goes on inside a girl's head?

Blake: It started with "Cybil Shaves Her Head" which was supposed to be an updating of F. Scott Fitzgerald's "Bernice Bobs Her Hair." So I thought one of Cybil's friends should tell the story. A girl. In that first story, I mostly made fun of the dumb suburban mall girls, and how they talked. It was very satirical and pretty unkind to the girls and teenagers in general.

I found though, as I continued with my more serious attempts at literary fiction, that I kept thinking about Cybil and her gang. They were such lively, fun characters. They had really come to life. So I went back and continued their story.

As for knowing what girls think about, that has never been hard. In the midst of the first draft of "Girl," I asked a room full of women from the bookstore I worked at, "What did you think about in high school?" They all, in unison and unprompted, said: "Sex!" I think I more thought about “boys.” But I was very innocent.

Generic author picture of Blake until he wakes up and sends us a better one.

Generic author picture of Blake until he wakes up and sends us a better one.

Christina: Is there anything of yourself in Andrea?

Blake: Oh, Andrea is me. Totally. I mean, the "boy" parts of my character are my worst qualities. I'm egotistical, competitive, selfish ... So Andrea is like me with all the good parts and none of the bad. Which really freed me to let her be herself in the story.

She didn't have any demons really. She's a genuinely good person. And her "journey" is very similar to mine too. Starting off in boring suburbia, discovering, incrementally, that there's this bigger, more interesting world. Taking those first steps into going to your first "show," wearing your first thrift store clothes. It was really fun to relive that stuff. And as a writer, if you're having fun writing it, the reader is going to have fun reading it.

Christina: How much of "Dream School" is based on your own college years?

Blake: A lot. Especially the beginning, that first year or two of college, that's pretty much my experience exactly. I was pretty out of my element at a fancy college like Wesleyan (Wellington, in the book). But probably most people feel that way.

I especially enjoyed writing about those first months when every little detail matters. When you're noticing what kind of watches people have and how they organize their dorm room. And people are reading The Economist and you're thinking, "Oh my god, I don't know anything about the world." Also the loneliness of it, and that sense that "your life is starting." You are truly on your own. It's a real test. It's a real "rite of passage" moment, especially if you didn't already go to boarding school or Exeter or whatever

Christina: When did you write "Dream School"?

Blake: I wrote it somewhere between 1998 and 2000, I think. I don't actually remember. I wrote it at the exact wrong time, in terms of getting it published. It was too late to do a series type sequel and it was too early to do a retrospective type thing. I must have had a lot of faith in it though, because when I dug it out years later, I though, "Oh, I'll have to fix this up" but it was actually very polished and solid and ready to go.

Christina: How did the Figment serialization come about?

Blake: I met a woman named Lauren Cerand who is a very sharp book person and when I told her in 2008 that I had written a sequel to "Girl" that was in my drawer, she got very excited. She thought we were coming into a cycle where people would be very into that. She thought about it, and encouraged me to think about it, and then the Figment people, who were also very smart, appeared and they started thinking about it. And slowly we hatched a plan.

My Figment editor and I are already discussing a third book. Andrea goes to New York and gets her first novel published. I think that would be great. I want to read that.

Christina: In general, do you plan out your books in outline form or do you write them off the top of your head? I write off the top of my head but maybe that's why I can't finish any book. Blake, how do you do it??? How are you so prolific? I need help.

Blake: No, I'm not a planner. It's the characters for me. Finding a character who is interesting enough to hold the readers attention, (and mine), and then introduce that person into various situations or conflicts. I have been getting better at plots, but I don't care that much about plot.

Christina: I don’t care about plot either. Boring! Am I right that "Girl" was not written specifically as YA fiction? Back then YA was not the healthy publishing category it is now. It was more of a ghetto, as I remember.

Blake: Yeah, "Girl" was not YA originally. I didn't even know what YA was at the time. I thought of it as more like "Less Than Zero," or something like that. Or like F. Scott Fitzgerald, that's actually probably the biggest influence. "Girl" has struggled as a YA book, actually. It is a hard sell to paranormal fans and the kind of romance-y type fiction that plays well at the moment.

I have found it an interesting sociological experiment watching today's readers react to it. We are in such an escapist period right now. And very sheltered. I am always warning parents about it. I'll be at a reading or something and some 12-year-old girl will pick it up and I'll have to snatch it away and say: "It's for older teens." Of course, a minority of smart kids really love it, it's like an oasis of something. But a lot of kids don't even understand what the point of it is.

One woman on Goodreads said she would recommend it: "Only to people who like frozen yogurt and casual sex."

Christina: So, like, everyone, then!
Posted by Blake Nelson at 4:19 PM No comments: 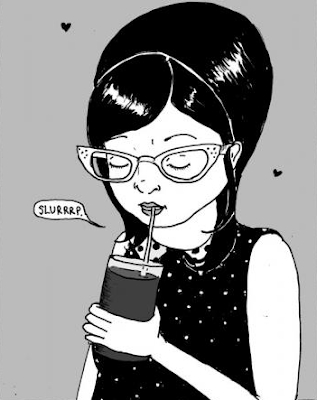 Got to see my favorite graphic novelist/zine person NICOLE GEORGES last night, talking about her work at the super fun Hollywood (Portland) Public Library. Oh my god, she is so awesome.

Martha Grover was her co-presenter, reading from her zine SOMNAMBULIST, her piece was the minutes of her family meetings during a period when her whole family was basically living together, as adult children or whatever. It was really funny. And then it turned out that these three cute women in the back, were her family, the people we had just heard about.

So yes, this post is mostly just an excuse to put up a drawing by Nicole, her pet portraits are amazing, but I am going with the self portrait....
Posted by Blake Nelson at 10:28 PM 2 comments: 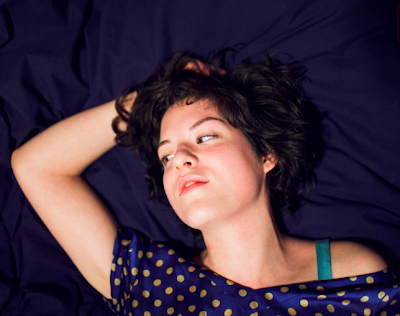 So everyone is gearing up for the big release of DREAM SCHOOL, the long awaited sequel to GIRL.

One of the fun questions that comes up is what does ANDREA MARR actually look like?

No cheating, the movie doesn't count, though I thought Dominique Swain was about right, minus the bizarre pseudo-90s hair they stuck on her, that no one in the 90s actually had, except for the weirdos on MY SO CALLED LIFE, who when we look back now, look so fucking ridiculous, it wrecks the show.

Needless to say, in my mind, nobody had hair like that. They all had normal punk rock nineties hair which was just bobs and color or longer or bangs, or weirdo bangs or whatever....

This is what one person thought, and I think this is pretty good too .... black hair, that was the one thing I always had pretty clear in my mind ... other than that it is pretty open to interpretation ....
Posted by Blake Nelson at 6:09 PM 1 comment: